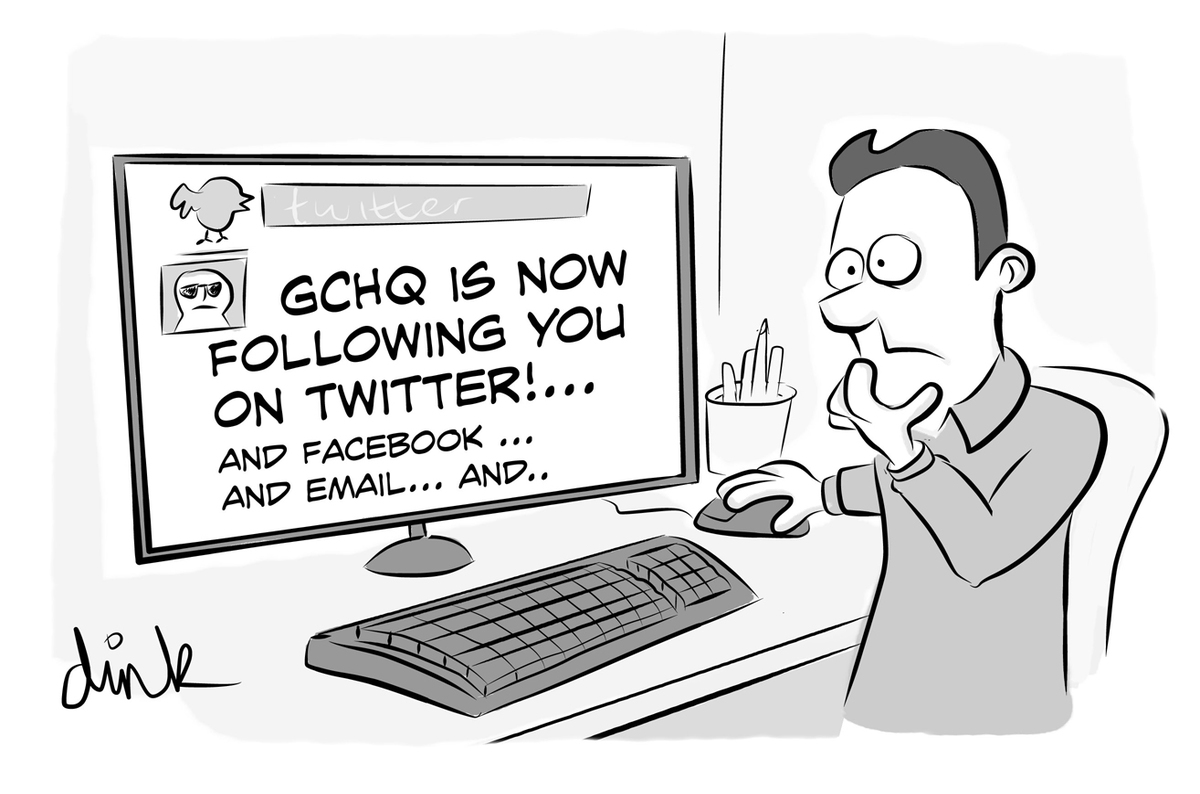 Over the last week or so, the mainstream media here in the UK have been filled with shock-horror stories about communications surveillance by western intelligence agencies. I’m a bit baffled by all the fuss to be honest. Monitoring, storing and sharing information are intrinsic to the very nature of digital communication, so it’s no surprise to find governments tapping into that for their own ends. What else did we expect?

They key thing is memory. Computers are often characterized as calculating machines, but to hold the results of those calculations computers need memory. And as the capacity of computers to calculate has increased in power and shrunk in size and cost, so has their capacity to remember. Media archaeologist Wolfgang Ernst argues that digital technologies are characterized by processes of micro-memory. Even when humans experience computers as working in real time, in fact packets of data are being rapidly sent in and out of little chunks of memory with names like ‘buffers’ and ‘caches’. Across a longer time frame, digital devices store data in ROM chips, flash memory, hard drives and so on. Digital technologies are therefore intrinsically archival. Their basic architecture involves the capacity to hold onto information.

If digital machines are constantly remembering, and we use them for communication, then it is inevitable that what we communicate is going to be remembered – whether for a few milliseconds, a few hours, for 30 days (as with GCHQ) or much longer. Since digital communication requires the networking of machines, the possibilities for circulating this stored data are endless, both legal and illegal, from routine monitoring and data harvesting to snooping, hacking and data theft.

Just think of all the personal data passing through phone companies, internet service providers, online shops, online banks. Now think of all the people along the way who could access it, whether legally or otherwise – call centre workers, IT technicians, communications engineers, account managers. It’s inconceivable that such complex pipelines, carrying such massive flows, would not be leaky. In the case of companies such as Google, Facebook and Amazon, their very business models depend on harvesting and selling on data from customers to advertisers. When you use Google’s search engine, they are gathering data from you just as much as you are from them. Intelligence services holding emails for 30 days is just the tip of the iceberg.

Of course there are all sorts of measures that can be used to restrict this information storage and circulation. GCHQ seem to be placing a lot of faith in laws and their employees’ obedience to them, claiming that they never actually access any of the stored data without a warrant. (This raises all sorts of questions: do they really think their employees always comply with this? If it is machines that have snooped on you, not humans, has your privacy been invaded or not? And if the machines are part of the organization, doesn’t the information stored within them count as knowledge within the organization?) As well as data protection laws, there are also restrictive technological systems such as secure servers, encryption systems, firewalls and so on. But all such protective measures involve choking the processes of remembering and exchange that are the life blood of digital communication. The failure of such measures, either occasionally or routinely, therefore seems inevitable.

So I’m skeptical about the value of building stronger regulatory systems to maintain privacy in digital communications. The capacity to siphon off and hold onto information is so intrinsic to digital technologies that looking to regulation seems almost like a denial of how these systems operate. Given the vastness and complexity of the infrastructures involved, effective regulation would probably involve swathes of new law, policing, enforcement, new technologies, heavy-handed discipline, and surveillance of the surveyors – which surely just returns us to the original problem.

This isn’t to say that regulation and restriction can’t be useful in many situations. The firewall in my home router is staying turned on. But we’re likely to be disappointed if we place all of our faith in restrictive, technocratic laws and systems to protect our privacy. Instead, I suggest we need to accept that information storage and exchange are intrinsic to digital communication technologies, and act accordingly.

The example of peer-to-peer file sharing of music offers a useful point of comparison. It’s a case in which there has been an enormous amount of digital data shared without permission, and a lot of consternation about the illegality and possible negative effects of that sharing. So it has some similarities with the current debate about surveillance. Record companies and some recording artists have made a big fuss about file sharing, wringing their hands, arguing for more enforcement of copyright laws and the shutting down of web services, trying to implement copy protection systems and so on, but people continue to share music illegally on a massive scale. Restrictive policing has had some success, with networks such as Napster being sued and forced to close, internet service providers sending out warning letters and limiting bandwidth for ‘persistent offenders’, and the prosecution of small numbers of individuals. But these efforts amount to damage limitation, and are hardly inspiring. Is this the kind of thing we want more of? Meanwhile, musicians are beginning to accept the reality of file sharing – whether they like it or not – and find new ways to make a living that depend less on the sale of recordings.

Similarly, whether we like it or not, I think we need to accept that, with networked digital communication technology, monitoring and sharing of personal data is an ever-present possibility. We can’t enjoy easy access to the internet without allowing the internet access to us. In most cases, it’s highly unlikely that anyone will give a toss about the banal stuff we chuck through these channels on a daily basis, so most of it will probably disappear without trace. But we might do well to maintain an awareness that interception is probably quite easy for anyone who is sufficiently motivated – whether a government agency, a global corporation or an individual, whether acting inside or outside the law. And the chances are we would never know it had happened.

If we really want to keep information out of these networks, it’s simple enough to do: we just need to make sure we don’t include it in any form of electronic communication. Don’t tweet it, don’t email it, don’t put it on Facebook (even with their privacy settings enabled) and don’t talk about it on the phone. Maybe coping with the reality of digital communication will involve dividing our information roughly into two categories. On the one hand, we’ll have information that we are willing to allow (albeit grudgingly) into the digital domain to be copied, stored, sold, exchanged, scooped or snooped; stuff that might be personal, but ultimately isn’t all that sensitive or critical. On the other hand, we’ll have information that we absolutely do want kept private, which we will learn to keep out of the digital domain entirely. Perhaps in years to come, older forms of communication such as letters and face-to-face conversations will be re-valued for the degree of privacy they afford, a bit like the way that the ritual of playing vinyl records has become more precious in a world full of MP3s.